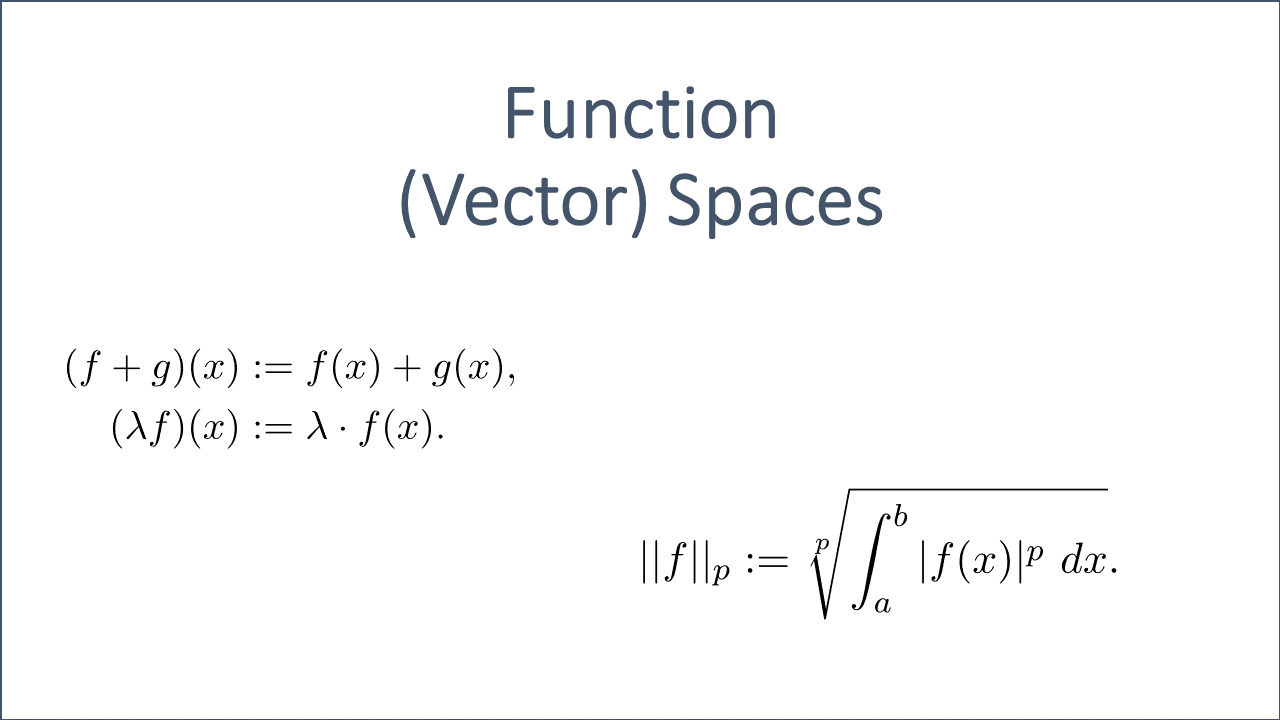 In this post, we study specific vector spaces where the vectors are not tuples but functions. This raises several challenges since general function spaces are infinite dimensional and concepts like basis and linear independence might be reconsidered. We will, however, focus on mechanics of a function space without diving too deep into the realm of infinite dimensional vector spaces and its specifics.

Let us start with the two pivotal definitions of this post.

vector space is a set

of vectors along with an operation

and a function, called scalar multiplication,

such that the following axioms are fulfilled.

are called scalars and the elements of

Every vector space consists of a field

and an Abelian group

. These two mathematical structures are entangled with each other via (ii) and (iii).

There are two additions defined. One addition for the scalar field

and another for the set of vectors

. Therefore, there are also two corresponding null elements defined – the null vector and the null element of the field. We nonetheless use for both additions the same symbol

since it is obvious to see, which one is meant. A similar treatment is applied to similar situations. For instance, there is little danger that the zero scalar can be confused with the zero vector, so no attempt is made to distinguish them.

the tuples with real entries and

, let us define the addition and scalar multiplication as follows.

The axioms follow almost immediately by the properties of

due to the definition of the addition of vectors and the scalar multiplication. The additive inverse of a vector

. The null vector is

and the definition of the operation and the scalar multiplication. Let us prove (ii)

, for instance. By definition the following holds true:

Functions are employed everywhere in mathematics. Let us also recap its definition.

The important feature of a function is, that every element of

needs to be assigned to an element of

is a vector space, then so is the set of functions

, and the negatives are

. The addition of two functions

are two vectors in

, the sum also needs to be a vector in

. Hence, by using the properties of the given objects it is not too hard to show that the given set

is indeed a vector space. Also refer to Function space in Linear Algebra as well as to Dualraum (in German). In latter source the more general function space

Let us now have another glimpse on a (finite-dimensional) function vector space.

Example 1.2: (Polynomials of finite degree)
The space of all polynomials with degree less than or equal to

is a finite-dimensional vector space as outlined by Dr. Trefor Bazett. Also check out the following video.

Another video outlines how the concepts of linear independence, span, etc. work in the space of polynomials with finite dimension.

Let us start with the most general case.

. We define the following operations on

We can check that all the axioms of a vector space are fulfilled. Note that

could also be set to

)
Let us check that the operations as defined in (1) are closed. If

then we can form the sum and the result

is still a function on the same interval.

Due to the fact that the associative property holds true in

by using the definition (1).

The null vector is the null function

mapping every element to the zero element of

. Again, just apply the definition of the operation as well as the properties of

The additive inverse of

holds true for all

The set of all function

is therefore an Abelian group. The other axioms can be proved similarly by just using the properties of the field

and the corresponding definition (1).

Thus, the set of all functions

is a vector space.

The role of the last example is usually considered to be small due to its generality. However, if we restrict the set

and thus add more structure and corresponding properties, then the situation will drastically change.

Each of the following sets of functions together with the operations (1) form an interesting and useful vector spaces. These function spaces are used heavily, for instance, in Approximation Theory and Functional Analysis:

Example 2.2 (Polynomial & Continuous Function Space)
The space of all polynomials with one variable over the rationals

as well as the space of all continuous real functions

Note that all arguments that have been used in Example 2.1 can be re-used except the closure argument. That is, we only need to show that the sum of two elements and the scalar multiplication lies again in the corresponding function space.

The sum of two continuous real functions defined on

is again a continuous real function on the same domain. This can be proved by using, for instance, the interconnection between continuous functions and the existence of limits. The closure of scalar multiplication can be shown in a similar way.

The addition of two polynomials

is again a polynomial of degree

. This becomes obvious if you consider a polynomial as a series of its coefficient.

The vector space is infinite dimensional since

contains polynomials of arbitrary degree. That is, you can find a set of polynomials such as

that are linearly independent and generates the entire vector space

Let us have an illustrated overview on a collection of the most important facts on the beautiful interplay between linear algebra and analysis provided by Dr. Trefor Bazett.

It is usually helpful to have an intuitive understanding of a mathematical object such as a function space.

Norm / Length of a Function

Inner products and norms enables us to define and apply geometrical terms such as length, distance and angle. These concepts can be very illustrative in the Euclidean space, however, what does the length of a function mean?

Actually, the definition of a norm on a function space is quite similar to what we had on the Euclidean space.

norms on function spaces)
The

norm can be thought of as the length of

. Let us illustrate the

norm for functions in the following example.

norm for functions)
The

norm on function spaces is defined by

for any continuous function

. It is ensured that a continuous and bounded function is integrable. Note, however, that

almost everywhere. The failure of this axiom, however, can be overcome by defining equivalence classes

. Nonetheless, we are going to use the notation

while keeping in mind that for the

norm this is actually an equivalence class. Refer to Remark 2.23 in [1] for further details.

Let us now look at simple example to better understand the heuristic. To this end, we set

So the length of a constant function on

. The length of the function

Apparently, the length of the function can somehow be associated with the area under the function graph. Hence, if we extend the integral to

, we get for the function the following:

The approximation of functions is a very crucial technique, that is used not only in Analysis, Numerical Math and Computer Science. Just think about how continuous functions such as the

function is calculated in the computer you are using.

If we need to approximate a function

, it is therefore of great importance to have a measure of “closeness” between these two functions. We can simply use definition (3) and slightly modify it to get a suitable measure of closeness between two suitable functions.

Please also refer to the following video for a nice illustration of these concepts.

In functional analysis, where Banach spaces are studied, the features of metrics and norms are of utter importance. For instance, the completeness of these function spaces play a crucial role as outlined in Banach and Fréchet spaces of functions.