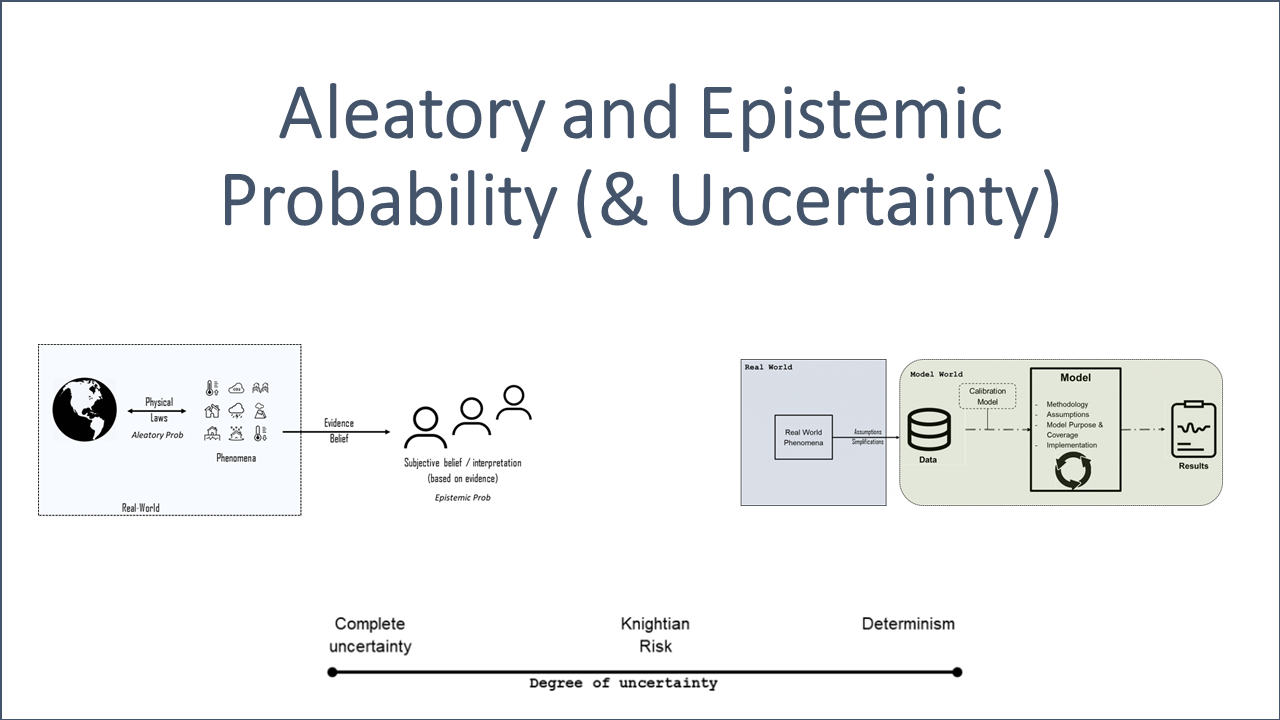 In order to develop a useful theory of events with ‘uncertain’ outcome, it seems to be reasonable to give a clear, unambiguous interpretation of probability. This post is about two different types of interpretations of probability and thus not only relevant to mathematicians but also to philosophers and practitioners.

Several videos and other articles are directly referenced within the post. It is recommended to check at least some of this embedded content since it will provide you with valuable background and in-depth information.

A very important aspect of such an interpretation is the inevitable uncertainty as outlined in Decision Problems, Risk and Uncertainty as well as in Uncertainty and Capacities in Finance. We are going to outline this topic in the corresponding context as well.

The following two sections will outline the meaning of Aleatory (e.g. frequency) and Epistemic (e.g. belief) probability. Afterwards, we will explore the different applications in machine learning, politics and finance.

The probabilities involved in statistical models and scientific theories, which are intended to model randomness in the real-world, are examples of aleatory probabilities.

Let us study standard examples of probability theory in this context.

Example 2.1 (Games and Objective Probabilities)
Gambling games can be modeled with a well-defined experiment since the scope and its conditions are stable. In addition, the outcome of one game (e.g. rolling dices) does usually not affect other games, i.e., they are usually independent. Games can usually be repeated arbitrarily often and they can easily be simulated. If the games are conducted properly, the interpretation of the outcomes of many games should be objective to a certain degree. Gambling games follow the laws of physics and can therefore be interpreted as an aleatory probability.

One of the simplest gambling games is tossing a coin. Let us think about whether such a game can really be considered as random.

Coin tossing is definitely a physical phenomena that is based on the laws of classical mechanics but subject to chaos. That is, a small change in the initial conditions of the coin toss can lead to a totally different outcome. The outcome is, however, deterministic as outlined in the following videos.

Also note that machine learning can be used to also predict other chaotic systems as explained in Machine Learning’s ‘Amazing’ Ability to Predict Chaos.

Due to the fact that this is an incredibly hard problem, scientists usually simplify and treat these games as a random or stochastic process. This approach is in general totally fine. Also refer to “Is it practical and useful to distinguish aleatoric and epistemic uncertainty?“.

Another video titled “The Search of Randomness” with Persi Diaconis outlines the deterministic property of tossing a coin even in more detail.

Aleatory probabilities appear not only in physics, but also in biological, economic, finance and psychological theories. These theories refer to empirical phenomena (such as flipping a coin), not to the beliefs of any person or group of persons.

There are two basic types of aleatory interpretation, each having several versions.

Propensity interpretations take the probability of a single event (not a sequence of events) to measure its tendency to occur in a particular kind of experiment. This interpretation regards probabilities as dispositional properties of real-world phenomena (e.g. physical symmetry of a fair coin). Propensity interpretation is theoretical and allow chances to be constructed from other physical properties through known laws, although typically the required laws are unknown and the chances must be inferred from statistical data.

Processes that are really random, i.e. a process determined by nothing, cannot be predicted since there is not pattern or algorithm that is recognizable. Hence, more information would not help to increase the trust in any prediction. In 2022, many scientists guess that quantum mechanics is truly random. Check out the following nice video What is Random by Vsauce and Veritasium.

The following video further tries to capture the meaning of randomness and connects it with information theory.

In the next section, we are going to outline what an Epistemic probability is.

The illustration in Fig. 2 shows the basic idea of Epistemic interpretations of probability. It is based on an interpretation and some sort of body of evidence. The more evidence we can use, the better the induction will be.

Example 3.1 (Games and Subjective Probabilities)
An alternative approach to Example 2.1 is to interpret the probability of a game as subjective beliefs. That is, a probability does not describe a property of an event but rather the subjective beliefs about it. The following quote from [1] underpins that distinction quite well:

‘This thumbtack has chance of 0.4 of landing pin-up’ is a statement of aleatory probability, because ‘chance’ denotes a physical property that does not depend on the observer. ‘He believes that the thumbtack will probably land pin-up’ is a statement of epistemic probability, because it refers to the beliefs of a specific observer. – P. Walley, [1].

Bayesian interpretation of probability is a special and very important case of Epistemic probability.

We can further distinguish the following types of Epistemic probability interpretation.

Logical interpretations, in which the epistemic probability of a hypothesis relative to a given body of evidence is uniquely determined.

The general term uncertainty covers many aspects. Unknown states of natures, unknown probabilities, preferences of the decision maker, and many other things that are not yet known (i.e. unknown unknowns).

F. H. Knight first distinguished in 1921 between ‘risk’ and ‘uncertainty’ in his seminal book [3]. On the one hand, Knightian or complete uncertainty may be characterized as the complete absence of information or knowledge about a situation or an outcome of an event. Knightian risk, on the other hand, may be characterized as a situation, where the true information on the probability distribution is available. In practice, no parameter or distribution can be known for sure a priori. Hence, we find it preferable to think about degrees of uncertainty.

Coming back to gambling – discrete probability theory and combinatorics were conceived in the 16th and 17th century by mathematicians attempting to solve gambling problems (see [4]).

Due to the fact that conditions of gambling games are well-known and stable, the degree of uncertainty is comparatively low. Good (but not prefect) estimates of the corresponding (objective) probability distributions are known. In such cases, classical probability theory and/or the classical measure theory are the right tools to tackle these types of problems. Note that even games of chance are subject to a certain degree of uncertainty.

Epistemic uncertainty, also known as systematic uncertainty, is attributable to the incomplete knowledge about a real-world phenomenon that affects the ability of the agent to model it. This may be because a measurement is not accurate, because the model neglects certain effects, or because particular data have been deliberately hidden, etc. and is therefore also called model uncertainty. This type of uncertainty can be reduced by increasing information since –at least in principle– we could know it better. Hence, additional information can push you further to the right in Fig. 3. This is ultimately the goal when conduction a model validation, increasing your data basis or improving your modeling approach in general.

These function approximation algorithms are used to extract a specific model from data. Learning in the sense of generalizing beyond the sample data seen so far is necessarily based on a process of induction.

Specific observations (sample data) are replaced by general patterns, which could also be considered as background models that generate data.

Approximation models can usually never be provably (i.e. deductively) correct but only hypothetical and therefore uncertain, and the same holds true for the classification or prediction generated by the model.

In addition to the uncertainty inherent in inductive inference, other sources of uncertainty exist, including incorrect model assumptions and noisy or imprecise data.

Relevant data usually reflect a real-world (random) phenomena and is therefore of aleatory nature. For instance, the time series of flipping a coin experiment reflects the seemingly random process that is governed by the laws of physics.

The following two videos roughly explain the backdrop and illustrate the application in machine learning.

Let us consider a statement by Donald Rumsfeld, the former United States Secretary of Defense, in 2002.

Reports that say that something hasn’t happened are always interesting to me, because as we know, there are known knowns; there are things we know we know. We also know there are known unknowns; that is to say we know there are some things we do not know. But there are also unknown unknowns—the ones we don’t know we don’t know. And if one looks throughout the history of our country and other free countries, it is the latter category that tends to be the difficult ones.

This statement is based on evidence and it applies rational arguments and an awareness of the inevitable uncertainty. Hence, it is clearly of Epistemic nature, which is typical in areas such as politics.

For instance, it might be the case that a group of people don’t know a certain fact. This group of people, however, can be split into two sub-groups:

Usually, category 1. is the more problematic as stated by D. Rumsfeld. The simple reason for that believe might be, that the degree of uncertainty is the highest in this category. We are not aware that we don’t know something of relevance.

Uncertainty and thus probability can also be categorized. The most fundamental distinction is between aleatory and epistemic concepts of probability.

Even though there are strong arguments why it is useful not only to restrict to classical probability theory, it is still common in finance to apply exactly this type of model.

Example 7.1 (EuroStoxx 50)
Let us assume that we would like to project the development of EuroStoxx 50. A quite common way to model such a projection is to conduct a statistical analysis based on the time series of the EuroStoxx 50.

As outlined in Decision Problems, Risk and Uncertainty, it is actually ignorant to just focus on the corresponding time series of the EuroStoxx 50. Relevant real-world phenomena such as political changes or (financial) crisis usually affect the performance of stock indices significantly.

There is a high level of uncertainty since we might suspect but we do not know when the next crisis is coming up (known unknowns). In addition, we might miss a relevant event or fact completely (unkonwn unknowns). Quite often market practitioners simply ignore apparently wrong assumptions such as the normal distribution assumption (known unknowns).

Nonetheless, we need to make assumptions and simplifications in order to abstract from real world since it is far too complicated to be fully modeled.