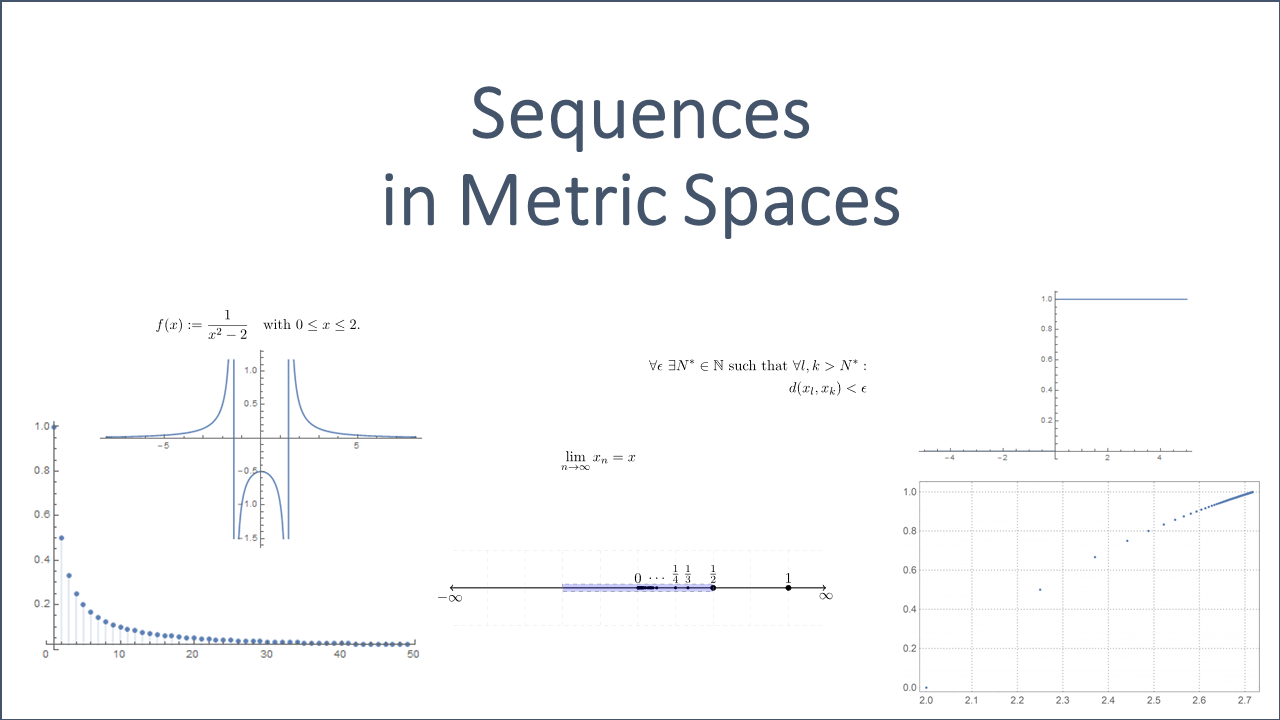 Convergence ca be defined in many different ways. In this post, we study the most popular way to define convergence by a metric. Note that knowledge about metric spaces is a prerequisite.

In order to define other types of convergence (e.g. point-wise convergence of functions) one needs to extend the following approach based on open sets. This, however, is not in scope of this post.

Limits of a Sequence

In this section, we apply our knowledge about metrics, open and closed sets to limits. We thereby restrict ourselves to the basics of limits. Refer to [1] for further details.

denote a metric space. If the metric is not specified, we assume that the standard Euclidean metric is assigned.

Definition 3.1 (Sequence):
A sequence in

is a function from

by assigning a value

to each natural number

is called sequence of

are called real tuple sequences. Note that latter definition is simply a generalization since number sequences are, of course,

if there is some

. We need to distinguish this from functions that map sequences to corresponding function values. Latter concept is very closely related to continuity at a point.

Sequences are, basically, countably many (

– or higher-dimensional) vectors arranged in an ordered set that may or may not exhibit certain patterns.

can be written as

and is nothing but a function

b) Let us now consider the sequence

that can be denoted by

. The range of the function only comprises two real figures

is mapped on itself.

, that can also be written as

We might think that some of the above examples contain patterns of vectors (e.g. number) that are “getting close” to some other vector (e.g. number). Other sequences may not give us that impression. We are interested in what the long-term behavior of the sequence is:

Note that it is not necessary for a convergent sequence to actually reach its limit. It is only important that the sequence can get arbitrarily close to its limit.

Convergence of a Sequence

Now, let us try to formalize our heuristic thoughts about a sequence approaching a number

that fulfills this requirement is called convergent. We can illustrate that on the real line using balls (i.e. open intervals) as follows.

centered at the convergence point or limit x. For instance, for

we have the following situation, that all points (i.e. an infinite number) smaller than

lie within the open ball

. Those points are sketched smaller than the ones outside of the open ball

Accordingly, a real number sequence is convergent if the absolute amount is getting arbitrarily close to some (potentially unknown) number

Convergence actually means that the corresponding sequence gets as close as it is desired without actually reaching its limit. Hence, it might be that the limit

is not defined at

but it has to be defined in a neighborhood of

This limit process conveys the intuitive idea that

can be made arbitrarily close to

is sufficiently large. “Arbitrarily close to the limit

” can also be reflected by corresponding open balls

needs to be adjusted accordingly.

The sequence can also be considered as a function

If there is no such

is said to diverge. Please note that it also important in what space the process is considered. It might be that a sequence is heading to a number that is not in the range of the sequence (i.e. not part of the considered space). For instance, the sequence Example 3.1 a) converges in

to 0, however, fails to converge in the set of all positive real numbers (excluding zero).

The definition of convergence implies that

. The convergence of the sequence

to 0 takes place in the standard Euclidean metric space

in a metric space

does not need to converge, if

its limit is unique. Notice, that a ‘detour’ via another convergence point

is also bounded. We can prove this intuitive statement by setting

. Hence, it exists a

Let us re-consider Example 3.1, where the sequence a) apparently converges towards

. Sequence b) instead is alternating between

and, hence, does not converge. Note that example b) is a bounded sequence that is not convergent. Sequence c) does not have a limit in

as it is growing towards

If we consider one of the converging examples carefully, we will notice that we can chose an arbitrarily small

and we will find a correspondingly large

For instance, let us define

is called increasing if

. If an increasing sequence is bounded above, then

converges to the supremum

If you want to get a deeper understanding of converging sequences, the second part (i.e. Level II) of the following video by Mathologer is recommended.

converges to a limit

, its terms must ultimately become close to its limit

and hence close to each other. That is, two arbitrary terms

of a convergent sequence

become closer and closer to each other provided that the index of both are sufficiently large.

converges in a metric space

. Then for every real

is the limit of

is given. Due to the fact that

, we can choose an integer

is valid, we can conclude

by employing the triangle inequality of the metric.

The last proposition proved that two terms of a convergent sequence becomes arbitrarily close to each other. This property was used by Cauchy to construct the real number system by adding new points to a metric space until it is ‘completed‘. Sequences that fulfill this property are called Cauchy sequence.

is called Cauchy sequence, if the following condition holds true:

Note that all pairs of terms with index greater than

Example 3.2 (Non-Complete Space):
If we consider

such that symbols such as

can be interpreted and used. The letter

is assumed to represent a rational number in this example.

shows that the actual limit

is not contained in

Hence, a key question is:

Note that every Cauchy sequence is bounded. To see this set

, then there is a

. This means that all points

lies within a ball of radius 1 with

In an Euclidean space

every Cauchy sequence is convergent.

be a Cauchy sequence in

be the range of the sequence. If

is finite, then all except a finite number of the terms

are equal and hence

converges to this common value.

is infinite. We use the Balzano-Weierstrass Theorem to show that

has an accumulation point

, and then we show that

. First, recall that each Cauchy sequence is bounded. Hence, since

is infinite there must be an accumulation point

according to the Bolzano-Weierstrass Theorem.
Now let

, then there exist a

Let us furthermore connect the concepts of metric spaces and Cauchy sequences.

has a limit that is also in

.
A Banach space is a complete normed vector space, i.e. a real or complex vector space on which a norm is defined.

Complete and Banach space will become important in Functional Analysis, for instance.

One-Sided Limit of a Function

In this section it is about the limit of a sequence that is mapped via a function to a corresponding sequence of the range. As mentioned before, this concept is closely related to continuity. Let

denote the standard metric space on the real line with

Consider the Heaviside function as shown below. In the one-dimensional metric space

there are only two ways to approach a certain point

on the real line. For instance, the point

can be either be approached from the negative (denoted by

) or from the positive (denoted by

) part of the real line. Sometimes this is stated as the limit

is approached “from the left/righ” or “from below/above”.

The Heaviside function does not have a limit at

Hence, by writing the left-sided limit

Left-sided means that the

Accordingly, by writing the right-sided limit

Right-sided means that the

Consider that the left-sided and right-sided limits are just the restricted functions, where the domain is constrained to the “right-hand side” or “left-hand side” of the domain relative to its limit point

, respectively. If we then consider the limit of the restricted functions

, we get an equivalent to the definitions above.

Having said that, it is clear that all the rules and principles also apply to this type of convergence. In particular, this type will be of interest in the context of continuity.