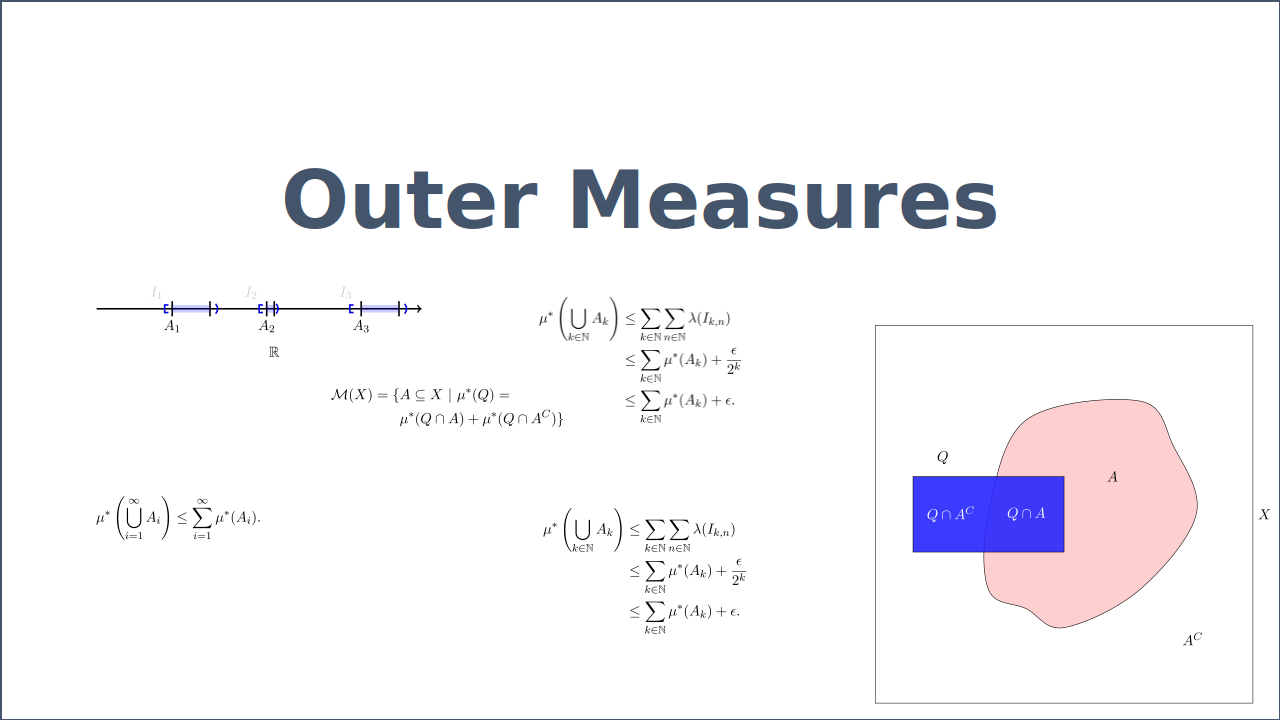 In this post, we will introduce the concept of an outer measure, and we will also illustrate the connection to the Lebesgue measure.

Definition 1.1 (Outer Measure)
Given a set

denote the power set. An outer measure on

is a set function

Property (ii) is called monotonicity and (iii) is called subadditivity. Note that there are other equivalent definitions that are used to define an outer measure. Outer measures are also known as exterior measures.

Apparently, an outer measure is in general not a measure and the domain is the power set and not the Borel sets

An outer measure only takes positive values since

. If we furthermore apply (i) of Definition 1.1 to a sequence

, we can imply the finite subadditivity property:

Let us consider two simple examples. The third example is more complex and will prepare the intuition for the upcoming theorem.

is an outer measure but not a measure. Note that this function does not fulfill the

(b) Consider the set function

is infinite. This set function is also called counting measure, i.e. it is not only an outer measure but also a measure.

and define the set function

that provides the length of the interval. Now, consider

Let us take some time to reflect on this definition of this definition. The real numbers can be illustrated as a continuous line so that any subset of

can be illustrated as some sort of drawn line that is not necessarily connected.

For instance, the set

This approximation can become better and better if the half intervals

are getting ‘closer’ and ‘closer’ (from the outside) to the sets

Let us now double-check that the defined function really is an outer measure:

fulfills (i) of Definition 1.1 since we can pick

be an arbitrary cover of

, so that every cover of

is also a cover of

. Because of the definition of

, the desired inequality can be inferred:

To show the subadditivity, let

. Then there are intervals 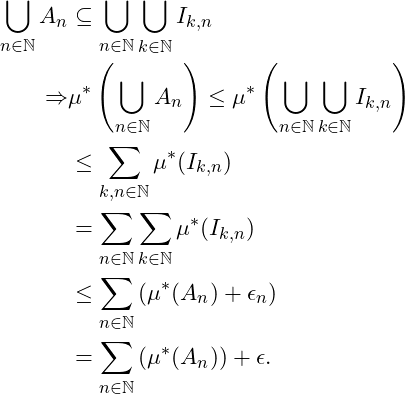 Note that we have applied the monotonicity property, the fact that we approximate the length of

by the length of

and the the assumptions

Since we can choose

is called an outer measure: it is an outer approximation of an arbitrary set

using a known measure of restricted geometry: intervals and their known lengths are employed to approximate the outer measure of an arbitrary set

Generalizing these thoughts lead to the definition of a sequential cover and the subsequent theorem.

with the properties that
(i)

there is a countable subcollection

A sequential cover of a set

is therefore a collection of specific subsets

that allows to cover all subsets

with a countable sub-collection of

In Example 1.1 (c), the set of all half-open intervals

is an example of a collection of specific subsets of

, which fulfills the requirements of Definition 1.2. These intervals can be used to approximate any other subsets of

Note that the definition of compact sets also requires some sort of a finite (sub-)cover. Refer to Definition 4.1 of Fundamentals of Set-Theoretic Topology for the exact definition and further details.

is a sequential cover of a set

is any function for which

in an outer measure on

Proof. Note that a similar proof was already given in Example 1.1 (c).

Property (i) of Definition 1.1 is fulfilled since it is required in Theorem 1.1. Let

. Since (3) is taking the infinum, it follows that

All that remains is to verify that

is countable sub-additive. To this end, suppose that

is a sequence of subsets

. Since we aim to show that

only the case where the sum converges (i.e. where the terms of the sum are all finite) need to be considered. For this case, suppose that

there is a countable family

Such a countable family

is a sequential cover. Thus,

forms a countable subcollection of sets from 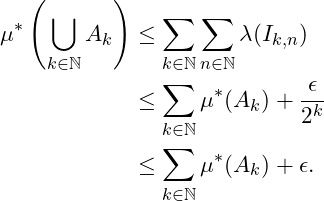 An outer measure is particularly useful since it is easy to construct a measures from it.

be an outer measure and

is called Carathéodory measurable if

. The set of all Carathéodory–measurable sets of

Note that some authors require

however, this definition is equivalent to (4) due to requirement (1) of Definition 2.1 of an outer measure. Note that if

is not finite, then (4) will be fulfilled anyway. 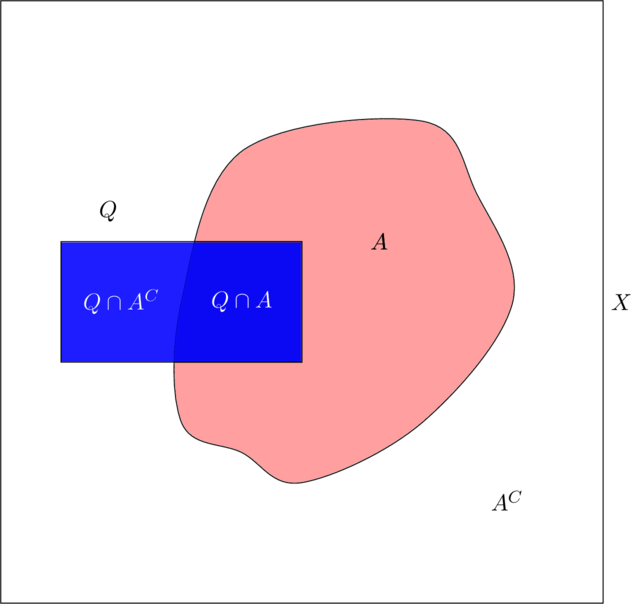 Recall that outer measures are also used to derive

-additive measures from it. Considering equation (5) and thus the additivity of

-measurable sets, it is clear that (4) is the first step towards the

-additivity of a measure.

Let us also review the definition of

, which contains all Carathéodory-measureable sets of

, which can be additively separated by using any other subset

an outer measure and

is Carathéodory measureable;
(ii) The set

because of the monotonicity and positivity property of any outer measure (i.e.

Now distinguish the cases when

is finite and infinite. Now, apply the finite sub-additivity (2). Both cases hold true such that (4) is fulfilled.

The next theorem indicates how an outer measure can be extended to a measure.

is an outer measure, the set

The last theorem basically tells us that

If we apply this transformation theorem to the Lebesgue measure, we can derive the following quite useful statement.

Theorem 1.3 (Approximation by Open/Closed sets in

is Lebesgue measurable if and only if, for any

, there exists an open set

, or a closed set

Another good introduction to outer measures is provided by NPTEL founded by the Indian government. It defines outer measure differently and derives the properties (i) to (iii) from Definition 1.1.